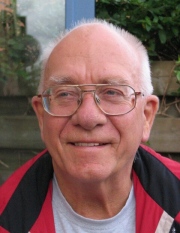 Professor of Theoretical Chemistry, University of Groningen, The Netherlands.

Founder in 1967 of the Quantum Theoretical Chemistry Section funded by the Netherlands Foundation for Chemical Research (SON) and in 1984 of the National Computing Facility, both under the auspices of the Netherlands Research Organisation (NWO).

Carried out the first ab initio calculations on transition metal compounds [Ni(CO)4, Co(CO)4- and Fe(CO)42-] in the early sixties (first at Purdue with J. W. Richardson and later at the Philips Research Laboratories in The Netherlands) demonstrating from first principles the existence and importance of p- back bonding. This work included features, novel at the time, as frozen core potential matrix elements and basis set super position corrections. Still at Philips published on chemical lasers as early as 1965, contributed to the development of luminescent rare earth materials and did theoretical work on the ionic model in relation to the virial theorem throwing a new light on this time-honoured model. Continued in Groningen from 1968 on the development and application of ab initio computational methods as a means to provide information complementary to that obtainable by physical experimentation. Worked on a variety of topics mainly involving transition metal and rare earth solid state compounds including the origin of ligand field splitting and superexchange in KNiF3, Mössbauer chemical shifts in iron compounds ranging from typically ionic (fluorides) to typically covalent (cyanides), point group and translational symmetry breaking in the study of local excitation and ionization processes and the interplay between relativistic and correlation effects on electronic structure. Programs to deal with this kind of problems were developed under his supervision in the course of time such as SYMOL (Van der Velde 1974), GNOME (Broer 1979) and more recently MOLFDIR (Aerts, Visscher, Visser 1985–present), a four-components relativistic electronic structure program suite based on the Dirac–Coulomb–Breit hamiltonian, that was awarded the C.C.J. Roothaan prize of the Royal Netherlands Chemical Society in 1995.