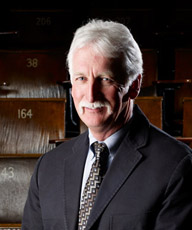 Annual Medal of the International Academy of Quantum Molecular Sciences (1986), ACS Arthur C. Cope Scholar Award (1990), Fellow of the American Association for the Advancement of Science (1994), ACS Award for Computers in Chemical and Pharmaceutical Research (1998), Award in Computational Biology from the International Society for Quantum Biology and Pharmacology (2004), Sato Memorial International Award from the Pharmaceutical Society of Japan (2004), Founding Editor of the Journal of Chemical Theory and Computationi (2005), Member of the American Academy of Arts and Sciences (2007), Fellow of the American Chemical Society (2009), Member of the US National Academy of Sciences (2011), ACS Hildebrand Award (2012).

Over 350 scientific articles in chemistry, physics, and biochemistry.

Early work included the seminal development of three-dimensional renderings of molecular orbitals as featured in the “Organic Chemist's Book of Orbitals,” co-authored with Lionel Salem in 1973. Subsequently, Jorgensen focused on combining quantum and statistical mechanics to pursue wide-ranging studies of chemistry in solution. This has included creation and application of the popular OPLS-AA force field and the TIPnP models for water; free-energy methods for organic reactions, host-guest binding, and other equilibria; the PDDG/PM3 semiempirical molecular orbital method; QM/MM simulations for numerous organic and enzymatic reactions; and methods for computer-aided drug design. Jorgensen has extensively studied the origin of solvent effects on organic reactivity; this has included elucidation of the potential of hydrogen bonding for catalyzing reactions. He also recognized the significance of “secondary electrostatic interactions” for host-guest complexation. The work on molecular recognition evolved to the design and synthesis of enzyme inhibitors as anti-infective and anti-inflammatory agents. The computational advances have been facilitated through continuous software development, e.g., the BOSS and MCPRO programs for modeling organic and biomolecular systems.