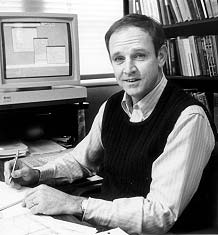 Numerous papers in the field.

William Miller has made a variety of contributions to the theory of chemical reaction dynamics, molecular scattering theory, and related topics. A comprehensive semiclassical scattering theory showed the physical origin of quantum effects in inelastic and reactive scattering, e.g. interference, tunneling, and 'rainbows' in product state distributions. The first example of 'chaotic scattering' was seen and analysed within the framework of this classical S-matrix theory. His formulation of quantum mechanical reactive scattering theory for chemical reactions has been widely used, and more recently the S-matrix version of the Kohn variational principle has been developed into a useful method for carrying out such calculations. A rigorous quantum expression for the rate constant of a chemical reaction was derived which is the intellectual descendent of Wigner and Eyring's transition state theory (an inherently classical theory), and its semiclassical evaluation led to the discovery of the 'instanton', a periodic orbit in imaginary time whose properties determine the reaction rate. The quantum reaction rate was also expressed in terms of a reactive flux correlation function which provides the basis for accurate quantum calculations of reaction rates. Other contributions have been the reaction path Hamiltonian for modeling reaction dynamics in polyatomic molecules, quantum and semiclassical theory of Penning ionization, a method for finding transition states on multidimensional potential energy surfaces, a unified statistical theory for reaction rates, and a combined random matrix/transition state theory for the probability distribution of state-specific unimolecular decay rates. Most recently the initial value representation of semiclassical theory has been developed into a practical way of incorporating quantum effects into classical molecular dynamics simulations.