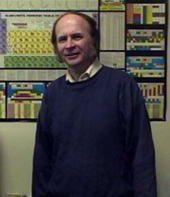 Electronic structure theory explains and predicts the properties of ordinary matter - atoms, molecules, and solids. Among these properties are the total energy and electron density, the set of equilibrium nuclear positions, the forces among atoms or groups of atoms, and the time evolution of the nuclear positions. This theory undergirds condensed matter physics, quantum chemistry, and quantum biology, with important applications to materials, nano-technology, industrial chemical production, and medicine. The underlying principles of electronic structure theory - quantum mechanics and Coulomb's law - are well known. But a great simplification of these principles - density functional theory - is needed to span the full range of real systems, from the hydrogen atom to DNA, by realistic computer simulations.

Kohn–Sham density functional theory reduces the quantum-mechanical ground-state many-electron problem to selfconsistent one-electron form, in a way that is formally exact but requires an approximation in practice. The main focus of my research is to understand the physics and exact properties of the exchange-correlation energy as a functional of the electron density, and to use this information to build more accurate approximations that can work for both molecules and solids. More generally, I am interested in the connections between condensed matter physics and quantum chemistry, and in other methods of electronic structure theory such as electron-ion pseudopotential theory.